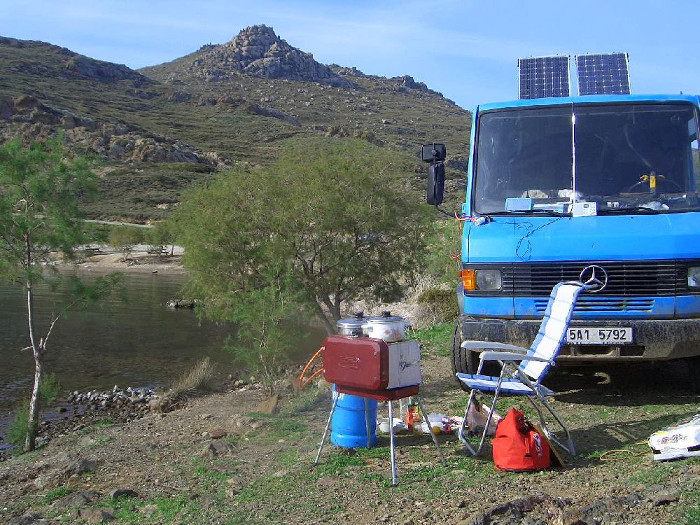 How to survive off the grid with a combination solar, wind and gas generator power. I lived off the grid for five years in Europe in my own home-made camper van. Then for more than two years on a remote paradise island in the Philippines. But now that I’m leaving that beautiful project I will be leaving all my electronics to some friends and have prepared the below instructions for them, modified afterwards for this website.

The system I use is based on 12V, direct current (DC), not the usual AC (alternating current) 220v you are used to from your wall socket. V represent “volts”.

You can get energy from the sun, or the wind. When it is cloudy, often it is windier. Also, often I find that it can get pretty windy around 2-3am, so it can charge or add energy to the battery when the sun is down.

You can combine it so you have solar and wind connected to the battery at the same time, you just need to be careful about the connection, because if it is not right you will break something.

What I usually do is I mark the end of my cables so I know which is which (positive or negative). I like to put a black electrical tape around the wire that is NEGATIVE. Every wire you buy should be marked (one of the wires). I like to consider that the wire (of two connected together) that has markings has something extra, so therefore POSITIVE. Otherwise black is usually considered negative while red or while positive.

Both the solar panel and the wind turbine require different regulators. The solar controller generally has a digital display showing the voltage of the battery and if it is getting a charge from the panel. Some controllers show exactly how much power or amps is being received from the panel. 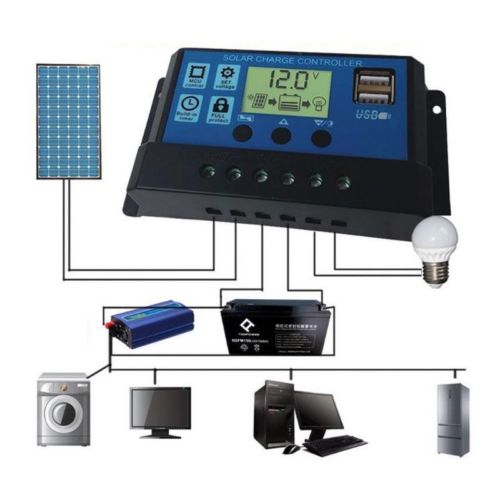 Generally what you want to do is connect the solar controller first to the battery. It should show the voltage. Then connect to your devices, such as your inverter (converts 12v to 120v or 220v – better to make sure everything is off before connecting), then finally the solar panel. 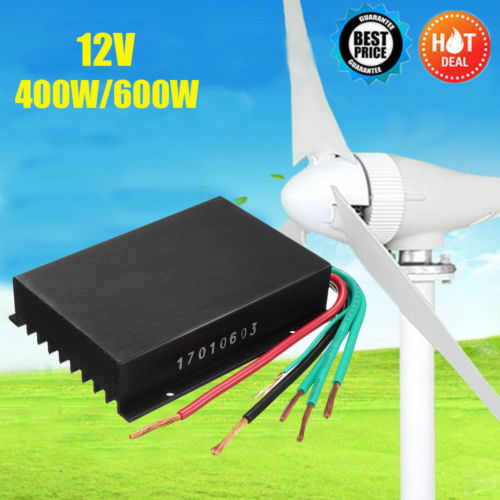 The wind turbine controller is more sophisticated. First of all, I bought one from ebay and it turned out not to be entirely compatible with the turbine, so make sure you research this first before buying. Best to ask the turbine seller. The turbine produces ac power and has three wires. My controller has three green wires, which you connect to the three turbine wires. Since it is ac power it does not matter which wires you connect.

If you allow the battery to drain too much, not only will it not be strong enough to power the inverter, but it may cause the solar controller to stop functioning properly. Perhaps the display will be going on and off. In this case simply disconnect and reconnect in order to reset it. First switch off the breaker switch so that no device or lights are drawing energy, then disconnect the solar panel (if there is light) and finally the battery, reconnecting it in the reverse order. 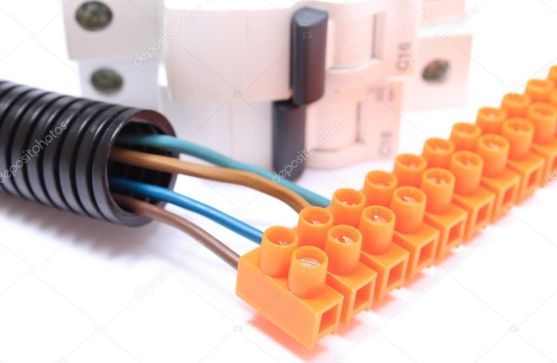 I connected one side together so that anything connected to the other side would all be either negative or positive. 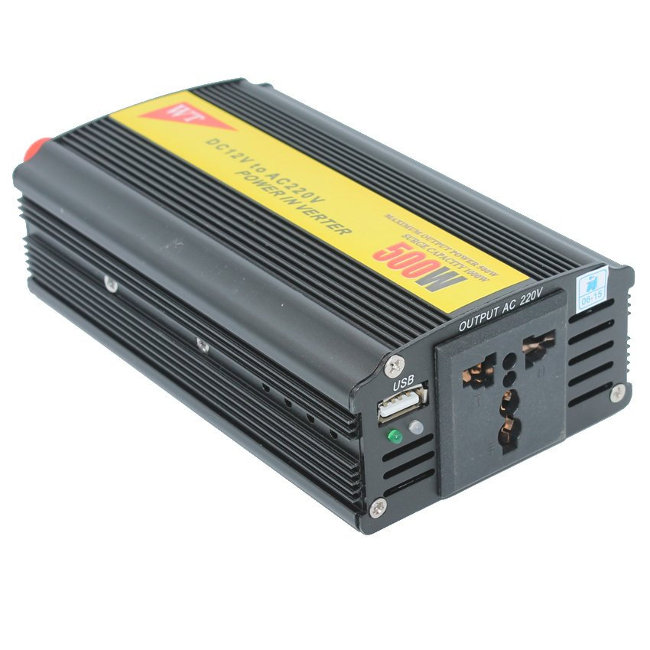 One of the connections is to an inverter, which converts the 12v to either 120v or 220v (you would need a separate inverter for each if you want both). That would then connect to an extension cord into which I could then connect anything, such as my computer. Some extension cords or even solar controllers have 5v usb outputs, handy for charging phones.

However, the inverter consumes some energy, and then you might lose additional energy if for example using an adapter which converts the 220v back down to 19v, a common voltage for laptops. It is therefore always better to try to not use the inverter. For example, you could purchase an adapter for a vehicle’s lighter. This is always 12v, so you could cut the cable and attach the respective wires to positive and negative. The tip of the car lighter adapter is positive and the outside metal ring contact is negative. Before cutting the cable, if it is not apparent which one is which, you can cut one of them and then use a voltmeter to find out which one is which, then mark it for future reference.

From the wind turbine controller you should also have a breaker switch before connection to the battery, and which also makes it easy to turn off in case your battery is overcharged, to help preserve its longevity. 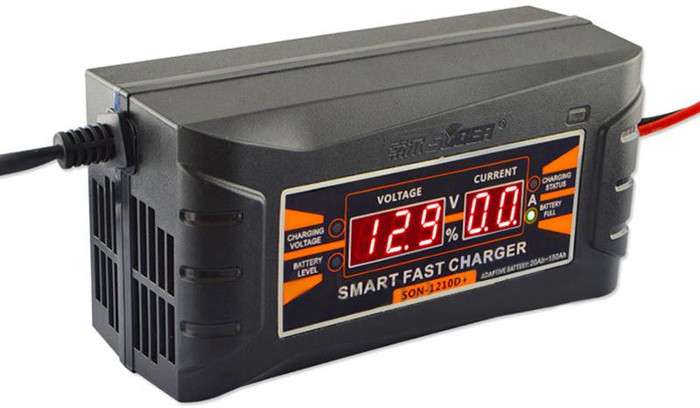 The nice thing about this connection is that when it is cloudy, it can often be windy, or once it gets dark the wind turbine can take over until morning. But sometimes both together are not enough and for this reason I bought a gas generator which I use in combination with a battery charger. The generator has a capacity of 1,500W, which is way more than is needed to power my laptop, but with the battery charger I could have the gas generator working for perhaps only an hour, which might be enough to charge the battery to last until morning. Simply plug the charger directly into the battery or the battery connection on the solar controller. A standard larger acid battery might have a capacity of something like 110 ah, or amp hours. So if you are drawing one amp at 12v, you might consider that your battery should last about 110 hours. I find that if during the day I manage to get the battery charged up to past 13v it will last until next morning running my laptop and my 12v fan. Generally I try not to drain the battery to less than 11.5v, otherwise you will reduce its life cycle.

First of all you want to get a deep cycle battery specifically designed for solar systems (not a regular car battery, which is designed differently). The best is the gel ones for golf carts, but they can be expensive. Or you can go to a construction site or warehouse and look into buying a forklift battery which no longer works. It may not be strong enough to operate a forklift, but it will certainly have enough juice to run something like a laptop for a long time still.

If you get the regular acid battery, even if deep cycle, they have 6 compartments each producing 2v (x6 = 12v). The water inside each cell is sulphuric acid and if for some reason the water level drops to the point that the metal plates within the cells will become partially exposed to air, it will hurt the battery. So make sure to open them from time to time and check the water levels. If it is too low then simply top up with distilled or clean rain water. 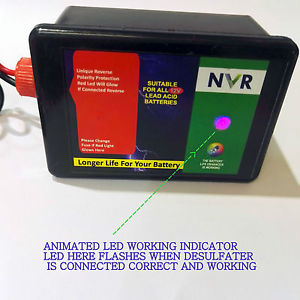 Over time the sulfur in the water can collect on the plates. If this happens in one of the cells it will become inefficient and drain the other cells, weakening the entire battery. But you can get a desulfater which sends out some sort of regular pulse which breaks up the sulfur and returns it back to the water. After two years my battery was already getting quite weak, so I gave it to a local, but later also the desulfator to test it and we were surprised to find it actually works! He noticed that the water in one of the cells turned brown after a few days, presumably the sulfur breaking off the plates, and a few more days after that the water became clear again, presumably it being absorbed fully back into the water. The battery was strong again and the product advertises that it can triple the lifespan of the battery, hence from the average two years to six. You can rotate it among several batteries or just keep it plugged in permanently.

Make sure to have a voltmeter to test things.
If you are in a remote area and especially if by the sea, best to get at least a duplicate of everything. The salty air tends to eat electronics and the inverter is often the first to go.
The solar panel is the strongest if it is clean of any dust and is exactly perpendicular to the sun.
The wind turbine should be in an open area, such as above the roof and not near any trees, to maximise airflow.
You can add a long string to the tail of the wind turbine to rotate it perpendicular to the wind if you want to stop it from spinning too hard, such as if the battery is already fully charged and it is too windy. If nothing is drawing any power from the turbine it can spin too fast and burn it out.
If you plug a wire from your computer into a sound system which is also plugged into the electricity, you may get some noise in the speakers, so best to use bluetooth.

Have fun living off the grid!

Back to Table of Contents