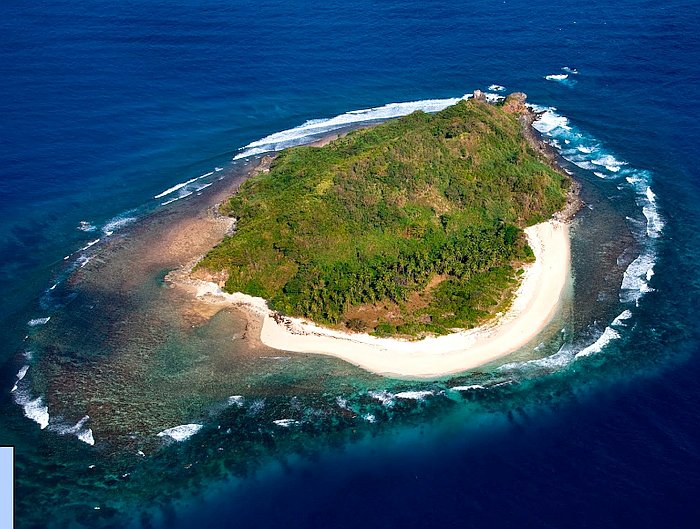 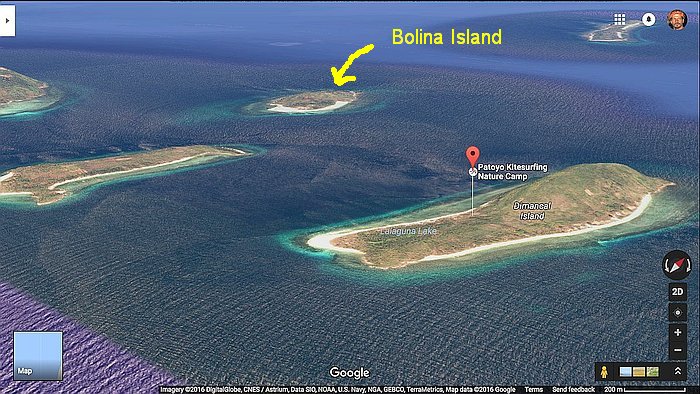 Bolina is located in the Linapacan area, half way between El Nido and Coron. If you do not have the budget to join one of our private multiday tours between El Nido and Coron, you can get to the Linapacan area by public ferry. Linapacan encompasses 52 mostly deserted islands, and you can get to Bolina with a local boat or combine it with a local boat tour. You can rent a tent(s) from the local boatman, who can also provide you with cooking gear or make you dinner etc. There are many factors and best to write to me for details. Expect an all-inclusive package to cost roughly 5,000p.

Very nice, wide fluffy beach ideal for teaching beginners on kitesurfing, as shown in the video below. Good for swimming as well, as the water gets deep right from shore. As explained in the official sales pitch for the island below, could be a good island for bird watching!

And if you really want to experience wild camping, you can canoe, kayak or longboard your way through the entire Palawan area, a mere 2,000km stretch!

The Island is located at the North-East tip of Linapacan Island, in the Province of Palawan, Philippines, with a total “Titled” land area of 125,059 square meters (12.5059 has.) In actuality, the whole island including the foreshore measures to around 24.5 hectares’. GPS at 11 degrees 33’43.27”N – 119 degrees 52’’06.81”E. The island has a wide beach coast on the south end with a 900 meter flat land area from the tree-line up to the center of the property. The sloped hill of Bolina on the North edge is a perfect ground for adventurous trekkers and mountaineers alike. The highest point in the island is around 164 feet from sea level, making it an ideal location for a view deck and or cabanas with a magnificent vantage point over the Linapacan straight. The north-west side of the island has a flat rock face with an inclination of around 70 degrees and an elevation of 80 feet. It is great for rock climbing activities. Photo enthusiasts and/or amateur photographers would marvel at the spectacular rock formations in and around the island. The surrounding sea is calm between the months of March to October making it possible for wake boarding, kayaking, Jet Ski, banana boat rides and other water sports. There are two natural wells on the island which could be harnessed and developed as a source of fresh mineral water supply for the inhabitants. From time to time, the surrounding islands are being monitored by the Navy, Coast Guard, the local Barangay units and the PNP “Bantay-Dagat” patrol boat for added protection. Commercial & other illegal types of fishing methods are strictly prohibited to help preserve the precious coral reefs and the marine life. It is also worthy to note that cell phone signals are available on the property. Smart & Globe telecommunication networks are present throughout the day. Bolina Island property for sale

The closest rural community from Bolina Island is the Inupupan Island (which is a short 15 minute boat ride). There are around 600 families that reside on the island. Basic public services are available on the island such as a small health clinic, flea market, a make-shift gas station, Barangay outpost (local police unit) and a small chapel. This rural community can be a source of basic food supplies with local fishermen selling their freshest catch daily and farmers selling their produce on the banks of the shore.

View from Bolina’s wide fluffy beach facing our island on the left, behind the sailing boat.

The island has a beach frontage of about 500 meters of unspoiled, powdery white silica sand. It is the only island in Linapacan with the widest beach from the tip of the sea up to the tree lines (which measures about 230 meters in the center). The beach is virtually protected by two elongated islands on the south-end making it an ideal place to just bathe under the sun without the worries of monstrous waves hitting you on the shores during monsoons and storms. The sandy beach covers almost the entire south-east tip of Bolina all the way to its south-west end. The sand gradually inclines from the shore towards the tree line at a 20 degree-angle with at least four (4) meters from sea level at its height. Its half crescent shape with its longest tip at the center faces southward, thus avoiding the strong North winds and waves that gradually reclaim the sand over time such as that of its neighboring islands. Flora & Fauna

The regular visitors of the island are the endangered sea turtles belonging to the Leather backs and the green back turtles which frequent the property all year round. They lay their eggs on the far end of the beach, two or three turtles at a time and then leaves without a trace. After 3 to 4 weeks, hundreds of baby turtles start to emerge from their burrows in the sand and instinctively rush to the sea, leaving only small straight tracks and empty shells behind. It’s a magnificent site and a rare opportunity to witness such a miracle of nature and actually be the owner of such a privileged island. The numerous varieties of birds that inhabit the island are also a key factor in promoting the place. There are endemic species such as the Tabon bird and the native Mayna. Finch, King Fisher, Red-head wood pecker and silver larks that inhabits the area has virtually transformed the island into a bird sanctuary. With a minimalistic approach and a genuine concern for nature, a peaceful co-existence can be harmoniously achieved between the island and its future developer. The coast line has about 170 coconut trees with additional trees being planted all year round. This multi purpose tree can yield lumber, the leaves can be woven together to form a strong type of roofing and wall (Nipa), which is locally used by the native Filipinos on their houses. The fruit is delicious and the coconut juice is a stable source of nutrient and is truly a tasty drink. Other fruit bearing trees such as the Cashew, Mango and Santol can be found all through out the island. Thick vegetation and foliage also prevents land spills and flooding during the rainy season and helps clean the air. A few type of flower bearing plants also abound the property with the beautiful white Orchid (native to this region) at the fore front. Large hardwood trees can also be seen dotting the entire island. The Marine Life

The marine life is another factor in considering this island paradise. The varieties of corals and fishes are too numerous to mention. Snorkeling in the crystal clear water around the beach will be more than a treat. Just hold a small piece of bread in your hand under the water line and you will be treated to a feeding frenzy of hundreds of fishes gently nibbling your hand. The water level during high tide is about 4 to 5 feet deep for several meters into the sea. Experience or inexperienced divers will get a kick out of the beautiful coral formations around the island. Just a few meters of the beach are varieties of anemone, branching alveopora marionensis, invertebrates & giant clams can be seen. The water is clear all through the year making visibility at 100%. Also worth considering are the dolphins which during their breeding months (between April to September) frequent the surrounding seas. Swimming with the boats and often putting on an acrobatic show for tourist and residents alike. They have grown accustom to their human neighbors and have flourished in numbers over the years. So travelling to and from the island will probably turn out to be a “dolphin watching trip.

To get here you can join or book one of our private custom Palawan boat tours between El Nido and Coron. Tons of paradise beach islands to see along the way, excellent snorkeling in crystal clear waters, caves to explore, Spanish fortress and much more. Completely off the beaten path!

>>> check out more trekking, or camping in the Philippines

Broad fluffy beach excellent for kitesurfing. No corals but it is a nice steep descent into the water, so great for swimming and relaxing, and camping out on at night!