Guimaras, the Mango Capital of the Philippines, is known to have the sweetest mangoes in the Philippines. It is also known for its white sand beaches and some historical beaches. It is one of the most popular places that tourists would visit whenever they are visiting Iloilo City beacuse it is cheap to get there and locals would call it as the mini version of Boracay because of its blue clear water and white sand beaches although Boracay has finer sand.

Guimaras is known to have had a unique history. A prevailing legend has it that two of its inhabitants called Guima and Aras, who were lovers, went swimming and never returned. Thus, in their honor, Himal-us was changed to Guimaras by the pre-Spanish Ilonggos.

The Province of Guimaras is composed of five municipalities namely: Buenavista, Jordan, Nueva Valencia, San Lorenzo and Sibunag. It has a total population of 151,238 in 2007 census.

How to get to Guimaras

Guimaras can be reached by air and boat from Manila and other origins, via Iloilo City and Pulupandan, Negros Occidental . It can be reached by ferryboats, pumpboats and other sea-going vessels via Iloilo Strait which is about 2.5 km. in length and Guimaras Strait from Negros. The origin/destination point in Iloilo City are located in Ortiz Street and Parola for pumpboats with regular trips. Travel time is about 15 to 20 minutes.

There are regular trips from Guimaras via San Lorenzo, with five pumpboats to Negros Occidental and vice-versa via Pulupandan and Valladolid. Pumpboats, because of  their size and speed,  have the advantage over the ferry in terms of the number of trips made, at most six trips per day. They may also be hired for special trips.

The major wharves in the province are the following:

Motor boats or bangka cost as cheap as 15 PHP during day time and 22 PHP at night. If you are staying in Iloilo City, there are jeepneys, taxis and tricycles going to the wharf.

The wharves are utilized for passenger transport and hauling of products for industrial and commercial purposes to and from Guimaras.

The port in Brgy. Hoskyn, Jordan has been upgraded to accommodate the RORO (Roll-On-Roll-Off) Sea Transport System capable of transporting products, passengers, vehicles and buses. The system is presently plying the route between Iloilo and Guimaras having four round trips per day except Thursday.

Meanwhile, the newly established RORO Port in Sebaste, Sibunag will be complementing the RORO port in Hoskyn, Jordan and soon be  operational. This can accommodate large vessels that will transport passengers and heavy cargoes to include vehicles and buses to ply the route from Guimaras to Negros and vice versa.

The province has a Feeder Airport in Barangay Mclain, Buenavista with an 18 m. x 6 km. runway and four meters shoulders on both sides.

There is also a private airstrip in Inampologan island, Sibunag primarily for tourism.

Guimaras is located in Visayas region and few miutes away from Iloilo City. The best time to visit Guimaras island is from December to May, which is the dry season and it’s also the best time to visit Guimaras tourist spots and the have Guimaras Island tours. I would say the best month to visit the island is in May when they celebrate their Manggahan Festival for few weeks. You will be able to do “eat all you can mangoes” for a cheaper price which I did once and I have finished 2 kilos for an hour, witness street dancing and have a food fest in their plaza.

There are jeepneys, tricycles or tuktuk,  and taxis to get around Guimaras in the main routes. When you leave and you get to Guimaras Island you will find jeepneys to move around but maybe you need to wait. taking jeepneys would not be doable if you only have a day to explore the island and if you want to visit many places because it is time consuming and you can not be sure if you still have an available ride back to the port before 6pm. However, it is the cheapest ride you can get. Prices of the jeepney rides go from 15-50 PHP depending on the distance. Jeepneys from San Lorenzo port to San Miguel costs 50 PHP each for a 40-minute ride. If you want more comfort and avoid the waiting time, you can ride tricycles instead to explore Guimaras Island. However, you need to pay more which would cost around 1,000pesos for a day trip depending on which sites you want to visit but it is more convenient and more comfortable than riding a jeepney. It is cheaper if there are many of you who can share the cost. There is almost no traffic around Guimaras Island.

There are places like Alubihod Beach where jeepneys will not go to. You will have to ride a tricycle which charges 20 PHP per person for a 2-kilometer ride. Expect to pay more if you are alone in the tricycle.

The cheapest way that I have discovered to explore Guimaras Island is by renting a motorbike. Most backpackers who are in a budget and want to explore off the beaten paths of Guimaras island on their own can rent a motorbike for 700 pesos/day or you can still negotiate the prcie for around 600pesos. Most motorbikes for rent at the port are either manual or semi-manual. If you are not confident enough to drive these kinds of motorbikes, you can walk further and you will find a small store near a vulcanizing shop. There’s a lady there who rents out her motorbike which is automatic. Renting a motorbike gives you more time to explore the island flexibly and more fun. You can stop whenever you want and you can explore dusty roads faster and easier.

For Guimaras Island Hopping tour, prices are 600 PHP for the first hour and 200 PHP extra per hour during the whole duration of your Guimaras island tour. It can be done for 3-4 hours or you can take more time if you decide to relax in Natago Beach, Ave Maria, Turtle Island or if you want to have the experience of having lunch in a floating cottage.

The Smallest Plaza
Proclaimed once as the smallest plaza in the whole world in the Guinness Book of World records. This smallest plaza can easily catch your eye while riding on a motorbike because it has a big signage saying it is “the smallest plaza”. Really nothing much to do here but taking bunch of photos.

The Guisi Lighthouse is one of my favorite places to visit in Guimaras. I think I have visited this historical site for at least four times already. The Guisi Lighhouse is located in Nueva Valencia, Guimaras. From the port, it is approximately 45 minutes to an hour by motorbike. You will need to trek for like 5 minutes to get to the Guisi Lighthouse ruins. It is where most tourists would take lots of selfies because of it’s magnificent structure. Before, you can still climb the old rusty lighthouse which will give you a beautiful view of the beach but recently, they put some wires on its entrance so no one could climb it despite of the warning saying it is prohibited to go up there. 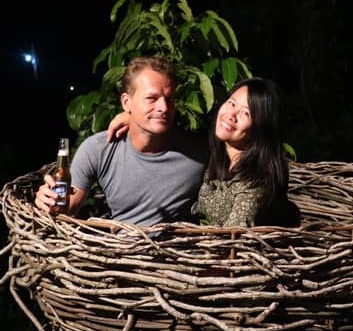