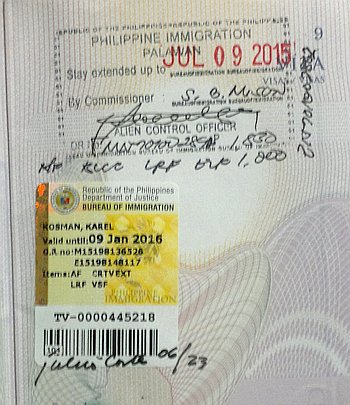 One of the reasons why I decided to move to the Philippines is because visa requirements are so easy and inexpensive. Unlike something like Thailand, which was a total pain.

For most countries they will automatically give you a 30 day visa on arrival, but if you plan to stay in the Philippines longer, I would suggest you get a 30 day extension on arrival (because it can be expensive and timely to get to the visa extension place). Otherwise, once in country, you can easily get extensions, but only in certain places. Such as Manila and Cebu (where you can also get 6 month extensions), or Puerto Princesa (not far from the airport) in Palawan, but where you can only get a maximum of 2 months extension every time.

I found the pricing a bit strange, as it seems to vary depending on which extension. The first one can be the most expensive (per month) and should be a maximum of 30 days. After that you can get 2 or 6 month extensions. I am currently paying about 8,000p for a six month extension, through the following agency (they can also arrange domestic and international ticketing for you):

Which is great, because I can leave them my passport and do not have to leave my beautiful island every six months, the cost of which (including getting back and staying at least one night in Manila) can easily cost as much as the extension itself. They are located near to the Bureau of Immigration as explained below.

You can also refer to a list of agencies accredited by the bureau (the above agency is on that list), or two discussions about the subject on facebook: 1 and 2. You can use LBC to courier your passport, although some have said they no longer permit that, but I haven’t had a problem. Others have suggested the 2Go ferry.

Live in paradise, don’t have to leave, except once every three years and it need only be for a very brief time (out-in). But hey, while doing so, might as well explore some of the nearby countries before heading back. I love the ease with which I can stay in this country. Just make sure you have a flight out ticket within 30 days, otherwise the airline may not let you back in.

Update: turns out you definitely need to show a flight out on your return, as you had to when you came for the first time. And if you have any time remaining on your six month extension, all that will be lost and you will have to start over. Through airasia I found a flight within 30 days to Taipei for only $45, subtracting luggage and insurance from the default. Not a bad extra cost every three years. But if you want to save you can try some fake plane ticket sites such as bestonwardticket.com. From them I received the following: 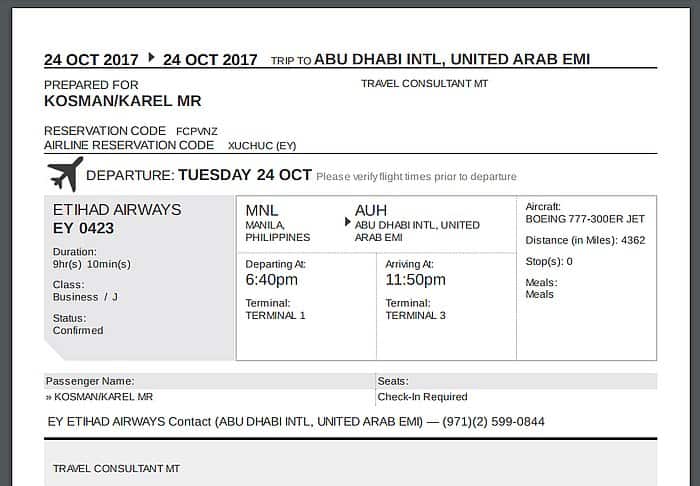 They prepare it for you during their operating hours, so make sure you plan a little in advance (ticket good for about 48 hours). Another suggested site is flyonward.com, or through Returnflights.net you can get it done for free with a little extra work (the others are about $10 a pop).

Or this is a good service: 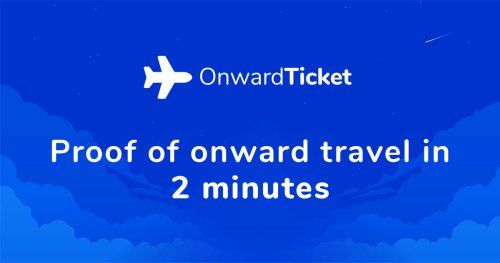 Leaving the country after a long stay

After finding the above agency, I simply couriered them my passport, they charge 700p extra to process each extension (which I’m even moreso happy to pay just to not have to endure another long visit to the immigration office), but when it was time to leave around the three year mark, I was alarmed to find out that I need to get an exit clearance! 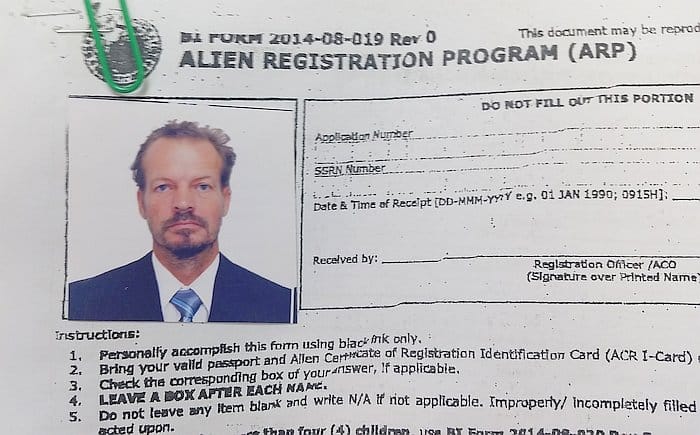 Unfortunately, in this case, I had to go down to the immigration bureau myself so that they could scan in my thumb and finger prints. Biometric details they call it, and Big Brother is growing big and fat all around the world. Why they couldn’t do this at the border like they do in Thailand, I don’t know. Anyway, it takes 3-5 business days to process, meaning you may have to stay for a few days in Manila.

Fortunately, I found a nice couchsurfing host to let me stay at her place for a couple of weeks, and although Uber taxis were a great improvement over the regular ripoffs, that too quickly became old and I found much better and cheaper ways to…

How to get around Manila

Uber is great in Manila, but it still gets expensive if you need to move around a lot. Grab is another uber-like service in Manila, but I heard several negative things about it. Below is what I found how to get around based on where I was staying and my needs, but I warn you, I like walking! Keeps you in shape and a great way to discover a city. 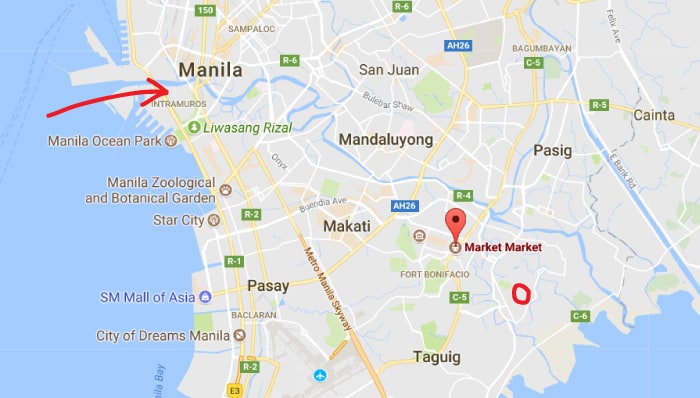 The arrow above is where the Bureau of Immigration is, and the red circle to the bottom right of the Market Market balloon is where I was staying.

Getting the Uber and Maps.Me apps on your smartphone is definitely a good way to prepare yourself for a longer stay in Manila.

Because I needed to do a lot of shopping and errands while in Manila, I already knew that Market Market is a good central place for shopping and errands. It is spacious and green, very pedestrian friendly, and you can find everything you need. But after a few days of ubering there, I discovered a wonderful, secret path. 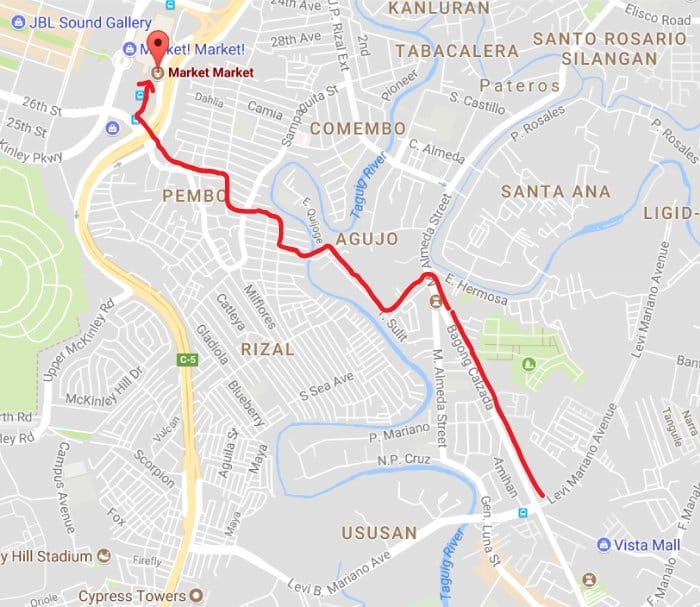 There is one sole bridge crossing this little river, and this is the rough path I chose. Here is a lovely pic as I cross the bridge: 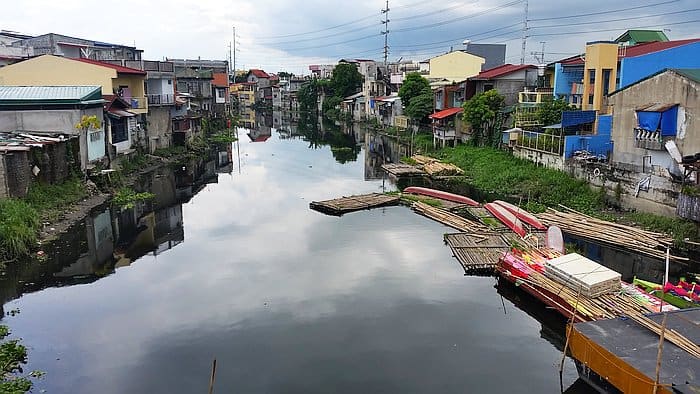 When I told my host I found a way how to walk to Market Market in about 40 minutes (not much longer than the taxis, as they crawl through traffic and are constantly stuck in one way stretches), she dismissed it as a possibility, arguing it is dangerous.

As a seasoned world traveler, traveling for 15 years to 38 countries thanks to my online job, I have passed through a ton of such neighbourhoods and never found them to be dangerous (but true, I’m a guy, and I like to walk barefoot – so perhaps a bit crazy and scary looking). Just because people are poor does not mean they are dangerous. In fact, I often find them more hospitable, giving and open than the rich folks, who are afraid of the poor people because they like to hold so dearly to all their possessions.

Hanging out with the locals outside a 711.

Anyway, it’s a nice walk I did almost every day, made a bunch of friends along the way, but now to get to the immigration office.

At the back of Market Market is where all the jeepneys, taxis and buses stop. You want to take the BGC East Express bus, which takes you straight to the Ayala MRT (above ground train) station. But every time I took it, the traffic was so slow I wished I was walking outside – especially because it was a particularly treey and green area, not because I wanted to save 12 pesos.

From Ayala station you take the MRT train to the end station Taft: 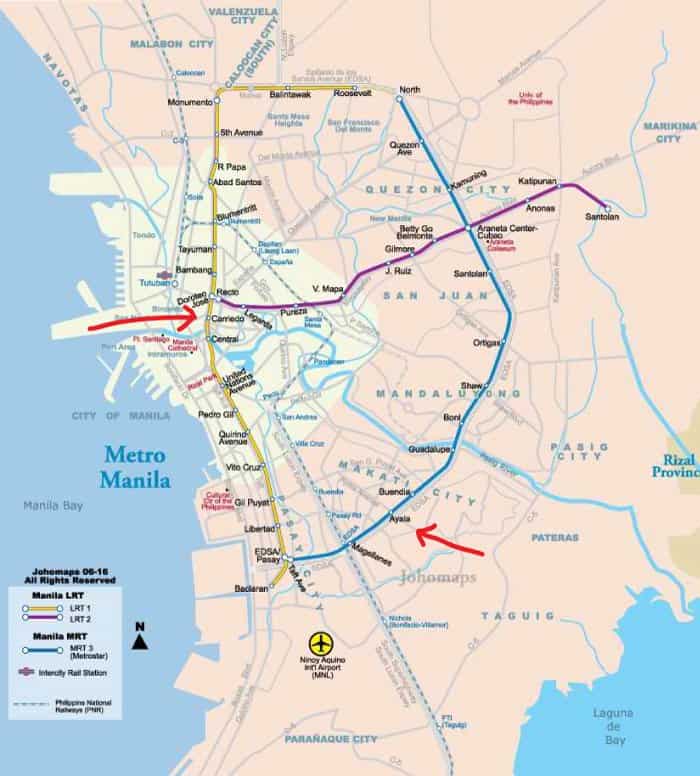 On the MRT line (blue on the map) it takes you to Taft station, from where it is a short walk to Edsa station on the LRT (yellow) line. You want to be going in the direction of Roosevelt station (when deciding on which platform to stand on). From there you want to go to Carriedo station.

Once you get off Carriedo, it’s an easy walk to the Bureau of Immigration: 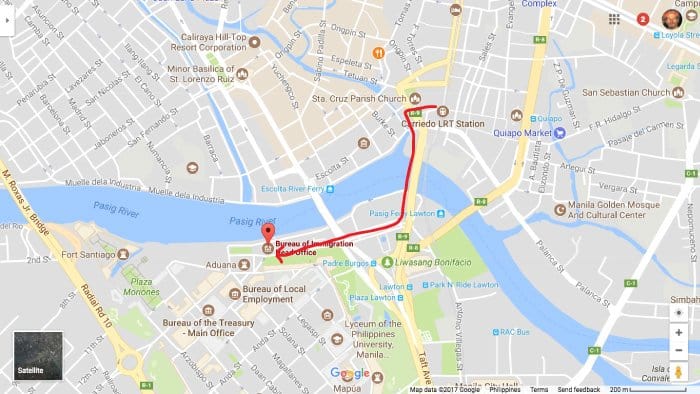 It’s a nice walk too! That entire distance would cost about 400p by uber and about an hour, or 45p by public transport and maybe 2.5 hours. So $7 bucks savings for the extra 1.5 hours, but so much to explore along the way. Make a fun day trip out of it, if you have the time!

P.S.  On the street someone suggested taking the train north from Carriedo to some station, I think he said Doroteo Jose, just one stop to the north, from where you can take a jeepney straight to Market Market. Jeepneys tend to be crammed and sweaty, but can be fun too. It could be a shorter route.

Back to Table of Contents
Back to our suggested itinerary for the Palawan area.