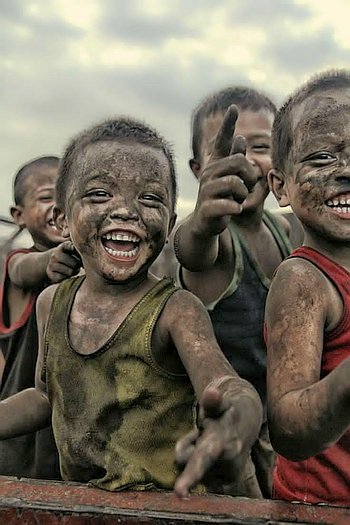 Back in Palawan when I was researching things to do in Manila for my website, I came across one blogger who wrote about visiting the slums. Horrid pictures of children wading up to their lips in black muck scrounging the city’s garbage in exchange for a bite to eat that day. Thought it could make a good photo op and imagined hordes of excited children chasing after and posing for me as I handed them 5 peso coins from my pocket.

During the week I forgot to go to the bank to cash a 500 peso (about $11) note for 5 peso coins, so instead I took out the spare change from my wallet in the amount of some 700 pesos and headed out one Sunday to explore. My host explained that I don’t really have to go to those particular slums but that Manila is speckled with affluent and impoverished neighbourhoods nestled next to one another, and that I merely need to cross a nearby bridge to get to this one. Although this one was considered “upper poor”.

I spent about an hour wandering through, amidst the occasional holler of “Hey friend!”, “Hey Joe!” or “What’s up?”, as the Filipinos like to say, but no sign of destitute, naked children looking like they had just crawled down a chimney, begging for money. 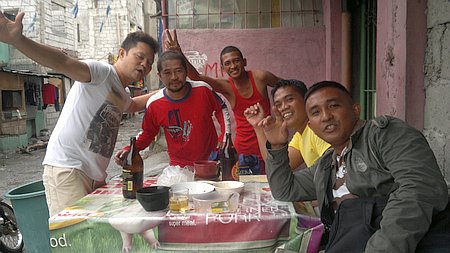 Eventually I entered a new quarter and was addressed by five blokes polishing off several 1L bottles of Red Horse beer (about 7% alcohol, so the poor man’s beer). They asked me to join them for a drink, I took a sip of the horse on ice, but because I had bad experiences with it, I agreed to sit down with them if I could buy a regular small bottle.

Soon enough two San Miguel Lights showed up, my second favourite, and I spent the rest of the day with them. At least my 700 pesos will be put to good use. 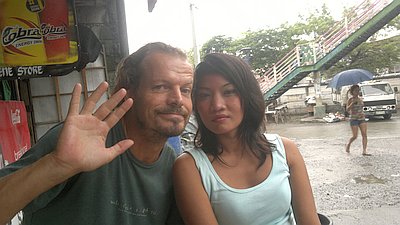 An hour into our conversation, as I was slowly catching up to their level of excited inebriatedness, a girl walked by on the street who caught my attention. I seemed to catch hers too, as she walked by staring at me, looking like she wanted to wave, stuttering in her walk as if not sure which way she should go.

Immediately one of the boys ran over and dragged her over to me, seated her next to me, put our hands together as if we were married, made me kiss her cheek, her mouth a little. She giggled away, occasionally placing her palm on my knee or chest in somewhat of a professional manner. “400 pesos for sex tonight, yes?” the boys would take turns trying to convince me. But the mascara-covered blemishes on her face gave me the impression of uncleanliness or something fresh off the street, so I wasn’t particularly interested in pursuing the issue further, my knees bobbing nervously as I tried to keep the flies off the sand fly infections on my legs. But for fun I played along.

At my wife’s request I bought her a few cigarettes, then a few beers, then a 100 pesos for a massage. It was time for one more round of beers, as I had also been buying the boys their beloved Red Horse and I only had a couple hundred pesos left. On suggestion I gave the last of it to my wife to fetch the beer. Of course she never came back, but ten minutes later one of the blokes came back with a bag full of light beers, rather taken aback when he realised I had no money left to pay him. So we drank that and I promised I’d come back in a couple of days to return the favour. 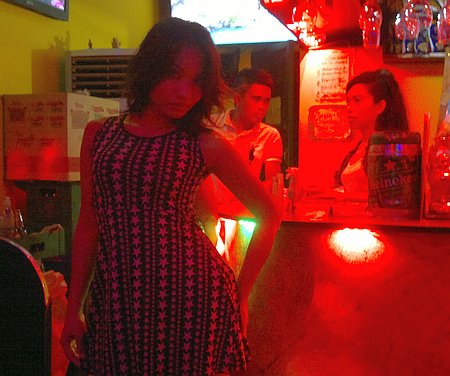 Managed to have better success on my last night in Manila, when I felt like staying up late to party and met a little vixen. We karaoke hopped until sunlight, got a room and stayed up until I realised how late it was, grabbed a cab at 2pm, packed up my stuff from my host and made it in time to the ferry departing at 5. Did I mention I love this country? Unfortunately, it slipped my mind to invite her with me.

On the way back down south I stopped in Coron to scope it out but, above all, to wait for some deliveries to the post office: a sim card router broadcasting wifi, a booster external antenna for that, and a big box of colloidal silver to try on myself and sell to guests. The router was already there but not the other two. Since the antenna might be necessary to catch highspeed internet in camp (very important), I ended up staying 10 days, but still no luck (although I did work out an arrangement with the postal clerk that others can pick up my shipments, grabbing his phone number in the process). But at least in the meantime I made another girly bar pretend girlfriend, played a lot of free pool, ate chicken burritos every morning (can’t remember the last time I’ve seen Mexican food offered), made some new friends, had a blast, bought some more construction material and on the last day stumbled on a Rasta dreadlock jambe maker, bringing one with me for only $90 poorer.

In Manila I purchased so many things and loaded them on some rickrackety boat on the suggestion of the property owner. Some of the boys on the boat egged me to give them 300pesos for beers, so I complied, hoping that will help my massive pile of arbitrary goods end intact to their destination. Also in Manila I picked up two used kiteboards from a volunteer who had lugged them all the way from Australia – that setting me back only $700 total (new kiteboards usually cost at least a thousand). So now I finally had the bait I need to start drawing in paying guests. Lugged it all to Coron, where I managed to load them onto a boat of the property owner, again giving the guarding crew member 100p for drinks and protection (I was still waiting one more day for the post office, since shipments come in from Manila only once a week). Amazingly, once I got back to San Miguel, not one single item was missing from the two boatloads was missing.

Piled it all onto a boat and unloaded it back in paradise with the help of a new volunteer. But when I arrived the caretaker of the property urgently explained how they found the tents left opened on several occasions. I quickly scanned them both and found the most important things untouched, but over a few days noticed that all but one lightbulb had been taken, all my flashlights, 3 bunji cords left outside and strapped to a tree (used to prop up my workstation tarp) and my portable 10V speaker for amplifying my viola – guess not bad considering I had been gone for about a month and the caretaker’s house is not so near to my tents.

At first opportunity I test the new router, but am shocked to find that my solar setup is not working, since the new inverter is not working (the old one started sparking and acting up the morning of my departure to Manila). Neither is my 12V and expensive fan, quite crucial to my overall comfort (when working during the day or sleeping in the hot tent) nor the regulator. Pulled out my voltmeter for testing but that is not working either. Eventually I deduced that its batteries are dead. Went back to San Miguel to buy batteries and a whole bunch more goodies, leaving the new volunteer behind to tend the show. On my return later that day, the voltmeter is still not working, but after struggling with the system for at least three hours (finding out that the old regulator and old inverter are not working either), I finally clued in that the new inverter and regulator are in fact working but that the new inverter only turns on its fan when it gets hot. 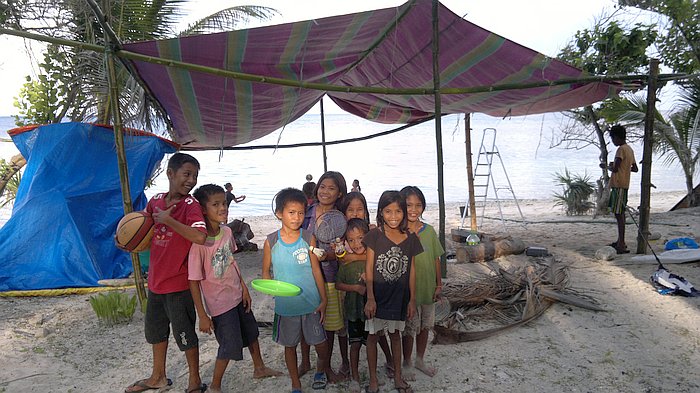 Local children welcome me back after I built rain cover for campfire.

I test the router and am elated to find it actually works, even without the fancy antenna. The owner lends me his 8x8m tarp until I build the main hut so that we can continue to sit around the fire when it rains and not have to retire early to our own tents. That is another important milestone. Having discovered me return, the beach’s 15 children came running to greet me and are elated that I have added a backetball and frisbee to the volleyball and badminton rackets I let them play with, and that I will soon be putting up the basketball net.

With the pillows and sheets I brought from Manila, highspeed internet in camp, a communal area with protection from the rain, increased favour amongst the locals, a new volunteer to stay an entire month with his friend and others coming soon, a six month visa extension (possible only in Manila), the two kiteboards and a growing pile of bamboo brought in by the owner (a little over $2 per 7m stalk – grows in abundance on a neighbouring island), I am looking forward to a long period of prosperous construction! 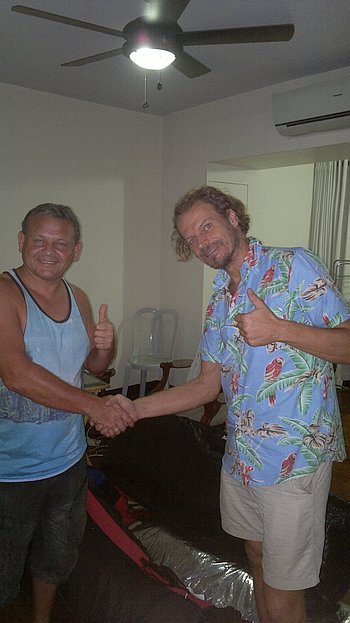 Ozzie mate with the two used kiteboards he brought for me,
wearing my new cheesy bar shirt. 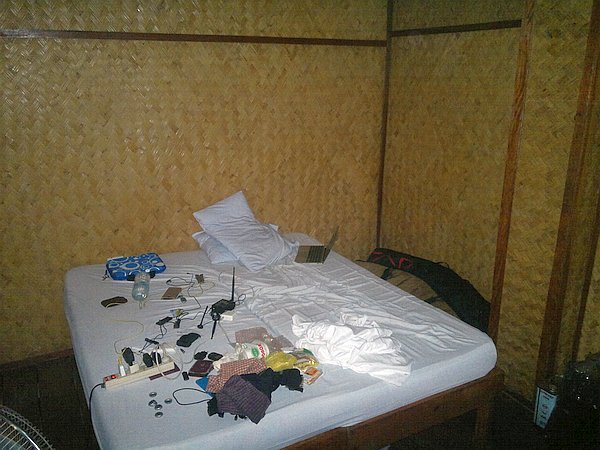 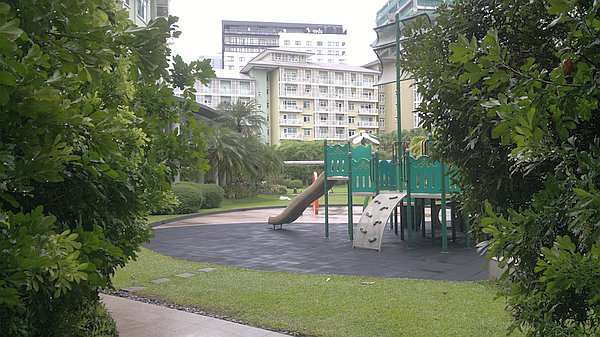 Fancy place I stayed at for free for three weeks at a couchsurfer. 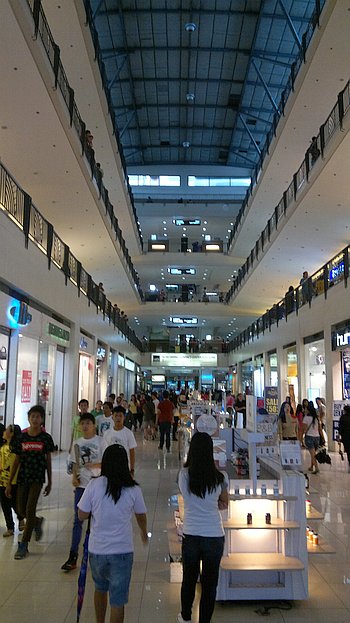 Market Market, a convenient shopping mall across the street from him. 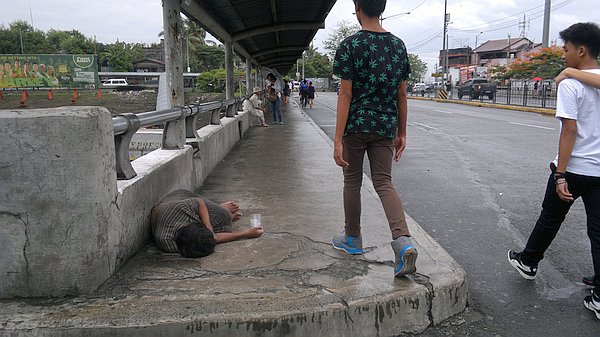 Entering the slum area just down the street from him. 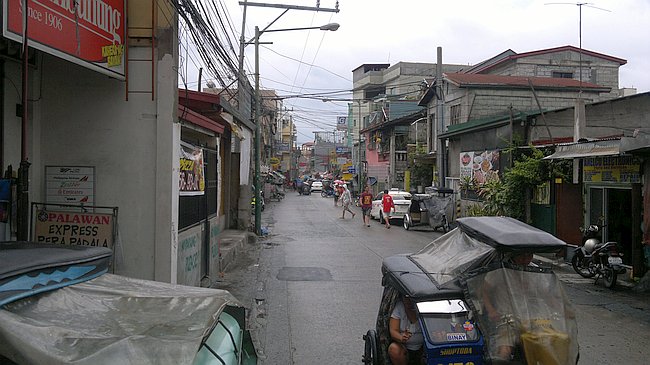 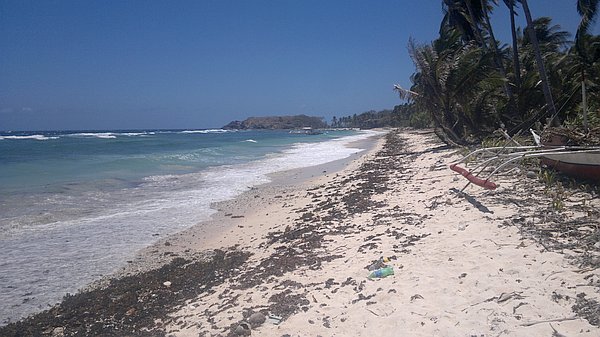 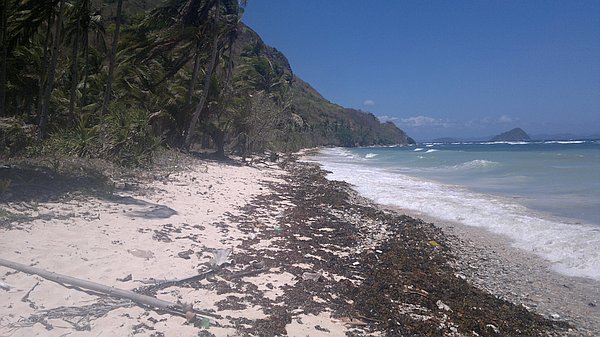 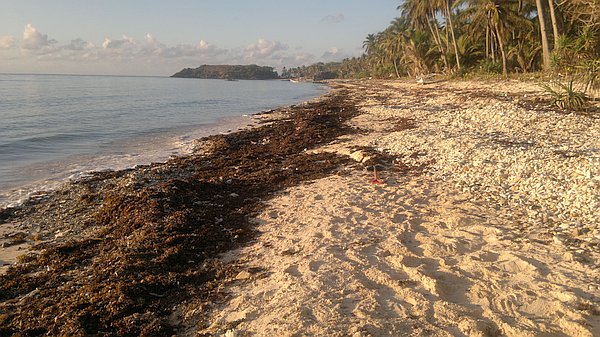 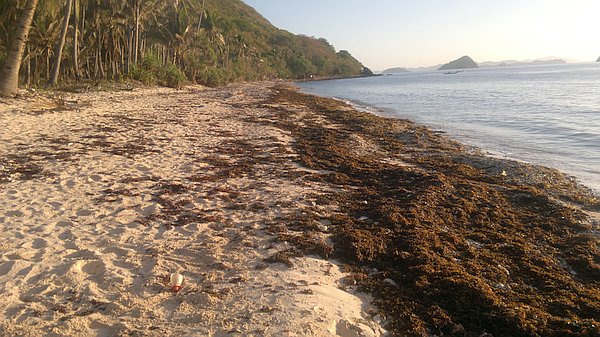 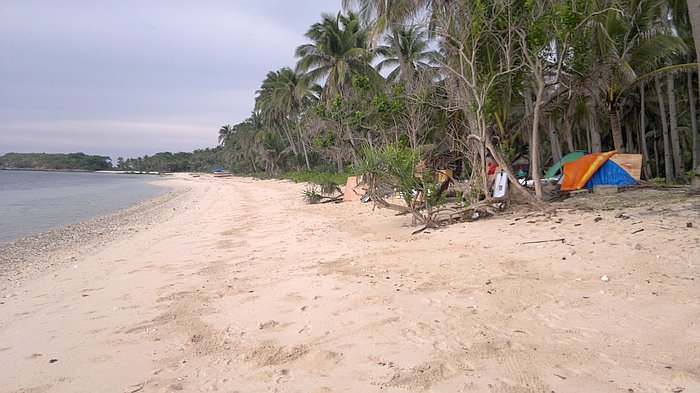 Nature was so kind as to clean it up for me before my return.
The powerful waves just gobbled up the rocks and seaweed! 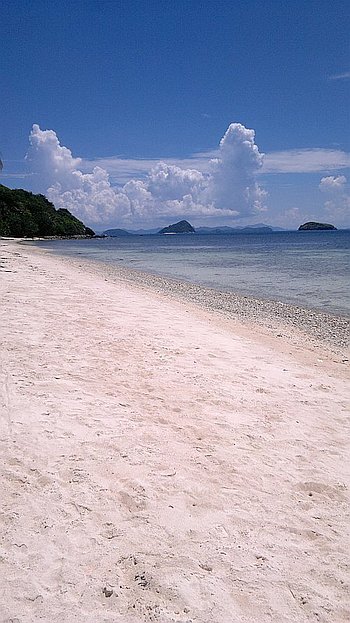